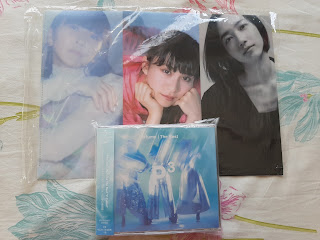 Perfume may be well known for their maximalist technopop sound, but they also have their small share of slower or mid-tempo songs. Based on that, and since the release of a comprehensive triple best of album called “The Best ‘P Cubed’” by them in September 2019, I’ve wanted to highlight some of these overlooked gems released by the trio through the years. Of course I’m not talking about all of them here, so honorable mention goes to “Baby Cruising Love” and “Macaroni”, which are among Perfume’s most famous songs of this type.


“I still Love U” was released in 2009 as one of “Triangle’s” promotional songs. Although the vocals are very auto-tuned, even by Perfume’s standards, the production, focused on a more romantic and charming synthpop sound, is full of interesting details that are already expected from Yasutaka Nakata (中田ヤスタカ) at this point. It’s been already ten years since the original release, but “I still love U”, together with “NIGHT FLIGHT”, remains one of my favorites from Perfume’s “Triangle” era, and the girls seems to like it as well, since the song still pops up in concerts.


Released in 2011, “Kasuka na Kaori” (微かなカオリ) was part of a double a-side single with “Laser Beam”, a stomper which soon became one of Perfume’s classics, and, in part because of this, the song easily got overshadowed by its upbeat sister. Still, I like this gentle ballad even more than the more famous “Laser Beam” (レーザービーム), and that’s because of the beautiful arrangement filled with piano, but also because of Perfume’s girly vocals. I remember that, at the time of its release, many people complained that “Kasuka na Kaori” sounded like a dull aidoru ballad, and that Perfume should not have recorded such an awful song, but I’ve never agreed with these opinions. It’s a song that somehow manages to make me feel warm inside.


“Sweet Refrain” was the start of Perfume’s “COSMIC EXPLORER” era, being released in late 2013. A lot mellower than the club bangers they were releasing at the time (“Spring of Life”, “Spending all my time”, “Hurly Burly”, “Party Maker”, etc.), the song didn’t win my heart until earlier this year, more than five years after its original release. The problem, of course, was not its cute vibe (I love “Kasuka na Kaori”, for example), but the lack of something sonically distinct, or even a strong melody, in my opinion. With a repetitive twinkle sound through the song and nothing really special happening (the awkward dubstep wibbles and wobbles placed here and there were never enough to convince me otherwise), I dismissed it as a weak single in their discography, to which I kind of still agree to a degree today. Even so, it grew on me and I accept it way better now, especially while listening to it in this newly released compilation.


When it was released back in 2014, “Hold Your Hand” was dismissed as being a second version of “Sweet Refrain”, and I can see why people thought that way. The problem is, around 2014 and 2015, it started to become clear to fans (especially from outside of Japan) that Perfume was not chasing a more aggressive or edgy sound, becoming a little bit stagnated in the cute technopop sound with flashes of aidoru pop here and there. Personally, I’ve always wanted them to grow artistically as well, but nowadays I’m okay with what their team decides to release. The whole futuristic brand they like to promote may have tricked some fans, but Perfume is an aidoru trio by heart. Back to “Hold Your Hand”, though, it has never been a problem to me, since I’ve always liked its aidoru sound and the cute instrumental sections a lot.


As was the case with “Kasuka na Kaori”, the beautiful “Relax in the City” also got overshadowed by its upbeat cousin, “Pick Me Up”, in its original double a-side single release back in 2015. And maybe I’m just getting more open to slower songs as a get older, but I really like the dreamy arrangement created by Nakata here. In fact, listening to it, I don’t think of relaxing in the city, but more on a fairytale-like valley or something like that (I’m probably just being influenced by the video, but okay). Anyway, it’s not a relaxing urban sound, but the song is great and classy nevertheless.

Way different from the other examples portrayed here, “STAR TRAIN”, which was also released in 2015, serves as Perfume’s take on a power ballad (or something similar to that), thanks to its singalong chorus and the overly emotive feelings it wants to evoke (it was a song released to celebrate their journey). It can also sound a little bit cheesy at times, as when they sing the ‘music is everything’, but that’s how this type of ballad works, so mission accomplished. As for what I think of it… let’s say that I quite like the arrangement and melody, but I’m not a very big fan of so much chanting. I never skip it, so that’s probably good enough.

My last entry today is the main promotional song for Perfume’s “Future Pop” album, which was released in 2018. The song is called “Let Me Know”, and while not a proper ballad, thanks to the upbeat chorus, it can be seen as a nice mid-tempo song that lets the girls’ vocals shine, especially during the verses (which are, in my opinion, the real highlight of this song). The song is quite simple and, unlike the majority of Nakata’s productions, there’s room for breathing in the arrangement, which also helps emphasizing the vocals. Also, I quite like the contrast between the verses and the explosive chorus. Again, a simple song (like the entire “Future Pop” album), but a neat one.
Posted by Marcos V. at 1:35 PM