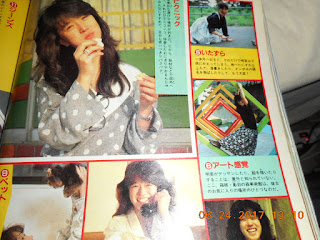 I first wrote about my first Akina Nakamori（中森明菜）album "D404ME" (1985) all the way back in 2013. As is usually the case with me, I don't talk about all of the tracks in an album article, preferring to focus on some of the stragglers in individual reports. So, tonight I've come to this one high-powered track.


"Star Pilot" is not my favourite track on "D404ME"; I think that distinction goes to either "Allegro Vivace" and the first song "Endless". However, "Star Pilot" is still plenty fun as Akina-chan pours her heart out for that titular space jockey and hoping for a ride in his warp ship. To be honest, the music already hints that the ride has already launched and Akina is heading out to the nearest nebula somewhere. Moreover, the singer's chant of the title has always stayed in my head all these decades. It's good ol' hot rod rock-n-roll courtesy of elementary school buddies-turned-rockers Kiyoshiro Imawano（忌野清志郎）and Kazuo Kobayashi（小林和生）with Tetsuya Chiaki（ちあき哲也）behind the lyrics.

Among some of the musicians in the recording booth for "Star Pilot" are Jun Aoyama（青山純）on drums, Tsugutoshi Goto（後藤次利）on bass and EVE as the backing chorus.
Posted by J-Canuck at 8:23 PM