Takkyu Ishino -- Ghost in the Shell 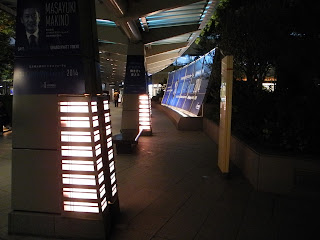 I barely remember the "Ghost in the Shell" anime that I saw on old-style VHS years ago, and I didn't think too much of the recent live-action adaptation with Scarlett Johannson. From that entire movie, I can only remember Beat Takeshi looking faintly like a fox with that haircut.


So, not having the greatest memories of one of the most influential manga/anime creations, I only just found out that Sony had sold a 1997 Playstation game based on "Ghost in the Shell", and probably one of the wisest decisions made in production was hiring techno wizard Takkyu Ishino（石野卓球）from Denki Groove（電気グルーヴ）to weave out the theme song and the soundtrack.


One of my old friends from university once told me a funny story of his wish to go to a really happening disco playing super-danceable techno and boogie the night away while the various TV monitors showed clips from "Macross" with the original Valkyries flying all over the place. Well, on hearing Ishino's theme song for the "Ghost in the Shell" in the last few hours, I realize what would have been at least one good tune for my club buddy to dance to. Mind you, perhaps having footage of the anime Major Kusanagi kicking major butt would have been the best tonic on the monitors.

What more can you ask for? Pulsating beats, give-and-take among the different machines, and images of Ishino fiddling with all the switches and flivvers like a master conductor and his orchestra.
Posted by J-Canuck at 10:17 PM