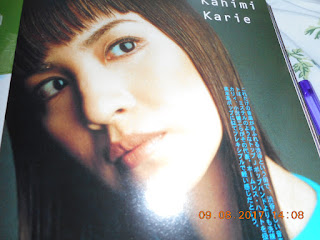 Had a very nice lunch with fellow translators and friends earlier today. It was ramen on the menu and I even took home some karaage chicken as a souvenir for my parents along with the mayo. Perhaps I should have taken it easy on the Kewpie, though, since after dinner, my gastrointestinal tract started holding protests against my choices. But then, I found out that an opened jar of mayo at room temperature can stay that way for 8 hours (!) before it's time to get rid of it. Go figure on that. Maybe my brain created a placebo effect.


Anyways, I shall refrain from further explaining the situation (I'm OK now...thanks for asking) since I now assume that you may all be giving me the same look that Kahimi Karie（カヒミ・カリィ）is giving in the top photo. Speaking of whom, it has been a while since she's been given her own article, so here is "Elastic Girl".

"Elastic Girl" is from her 1st mini-album "My First Karie" from January 1995. In fact, it's the first track and unlike some of the other songs that I've heard from the singer-songwriter, this one doesn't seem to belong in the Shibuya-kei category. I'd say that this is more country pop (Sheryl Crow, anyone?) and when it comes to her musical categories on J-Wiki, that is one category which is also listed for her. Nothing country about her vocals, though, which still represent her famous whispery delivery and tell of a woman who's more than willing to bend over backwards for a man.

The song was written by Karie and Bryan Burton-Lewis and composed by Keigo Oyamada（小山田圭吾）.
Posted by J-Canuck at 8:25 PM