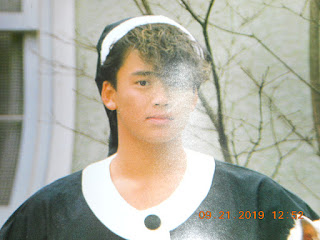 Beyond Hikaru Genji's（光GENJI）"Paradise Ginga"（パラダイス銀河）, my memory gets rather hazy when it comes to this Johnny's Jimusho band of the late 1980s.


So it was quite the revelation on hearing Hikaru Genji's 8th single "Kouya no Megalopolis" (Megalopolis of the Wilderness) from February 1990. Written and composed by Ryo Aska（飛鳥涼）, right from the intro, I thought that the melody sounded fairly Electric Light Orchestra with some of that sonic thunder and lightning. My suspicions were confirmed when Kazumi Moroboshi（諸星和己）and company went into their refrain, and I felt like it was the second coming of Olivia Newton-John's "Xanadu" from over a decade prior, which was a collaboration with ELO.


Therefore, "Kouya no Megalopolis" is a heroic and optimistic-sounding tune which pretty much demands that teenage boys have to roller skate all over the floor as it's playing. Aska's lyrics certainly relate the story of a fantasy-like super-city out in the badlands...Las Vegas? Anyways, "Kouya no Megalopolis" hit the top spot on Oricon and ended up as the 39th-ranked single of the year. One more little trivia tidbit from the J-Wiki description of the song is that it was also the 400th No. 1 hit in Oricon's history. Not sure if Johnny got some award to commemorate that, though.
Posted by J-Canuck at 3:48 PM