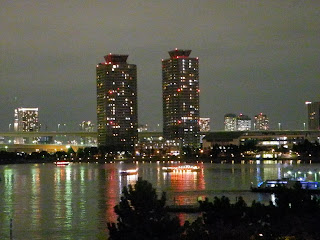 This morning, when I was checking Twitter, there was the following tweet from Van Paugam, the man who has been promoting my favourite genre of City Pop for the past few years:

After Japan I am considering an extended leave from DJing. My emotional state has been increasingly unstable. Politics, society, and traditions have worn me thin and I’m not sure how much more I can take.

For me, I may have been writing on this blog for nearly 8 years almost every day but it's a simple thing for me to get behind my computer and type away while importing a YouTube music video. However, for Van Paugam, he's put up a YouTube channel with the looping video of driving on a Tokyo highway or a Nagoya avenue that garnered a lot of fans to it as if it were the friendliest club for longtime listeners and people new to this aspect of Japanese pop music, he's traveled through various parts of the United States providing performances of City Pop and J-AOR with the necessary negotiations and bookings of venues and dealing with various people, he's given interviews to media touting the genre and he's recently gone over to Japan for a tour. He's also had to endure heartbreak when his YouTube channel got struck down along with any other possible setbacks that I don't know about. And all for this music that some of us have only just discovered and loved. Thanks to him, Tatsuro Yamashita（山下達郎）, Mariya Takeuchi（竹内まりや）and Makoto Matsushita（松下誠）and a lot of others are now household names in our musical vocabulary.

That is a lot of intense effort in a relatively short period of time, and so it's no wonder that he has begun to feel burned out. I'm happy to say that he has responded positively in the last little while to the messages of concern and encouragement, and I'm also hoping that he also takes some time to take a break and smell some roses and coffee and get some of that local deep-dish pizza. He's earned rest and relaxation after succeeding to let us know about some of the wonderful urban contemporary songs that were recorded all those decades ago.

Personally, if he does take that break (I hope), I don't think that he's going to stay away for that long. I think he loves the genre too much for that to happen...a sentiment that I feel all too well when it comes to my association with "Kayo Kyoku Plus". In any case, thanks very much, Van Paugam and otsukare-sama!


My two non-existent Canadian cents have been given. So let me get into the article with an appropriate tune by the late singer-songwriter Yuuichiro Oda（小田裕一郎）. A little over a year ago, I wrote something about "I Me Mine", one track from his 1984 album "ODA". Well, here's a raucous fellow number titled "Spanish Girl" that strikes me as spanning a few genres including City Pop. There is that City Pop groove but with some scoops of rock guitar and even some spacey flavour. Maybe there is even some Omega Tribe（オメガトライブ）rumination in there, too.

Always good to continue exploring for those new golden nuggets of City Pop.
Posted by J-Canuck at 8:00 PM