In my neck of the woods, it was first "Gatchaman"（ガッチャマン）under the English title of "Battle of the Planets" and then "Uchuu Senkan Yamato"（宇宙戦艦ヤマト）, which was known on this side of the Pacific as "Star Blazers", that basically heralded the arrival of Japanimation (as it was called back then) for my generation in the 1970s. We kids were left panting with excitement (and some tears) as we waited for what was coming next from Japan.

In Toronto, that was "Force Five" going into the 1980s which was produced by Jim Terry and involved the bringing together of five sci-fi/adventure anime: "Starvengers", "Danguard Ace", "Spacketeers", "Grandizer" and "Gaiking". Looking back, I think that most of the shows received a bit of the hatchet job in terms of prepping them for viewing in Canada and the United States but back then, these shows were good enough incentive for us to wake up in the morning before heading off for school.

"Danguard Ace" had been known to me even before "Force Five" came on the air here since the mecha was also one of the trio for Marvel Comics' "Shogun Warriors" line that I did buy for a while. I can only imagine Ace showing up in "Avengers: Endgame". Anyways, according to what I read at J-Wiki and Wikipedia, "Danguard Ace" was the only mecha anime that the legendary Leiji Matsumoto（松本零士）ever handled and that was back in 1977 and it was pretty obvious that it was a Matsumoto creation in terms of how similar some of the characters looked when compared to the main characters in "Yamato". I just thought it was the usual gang but not on a massively refit World War II battleship but a transformable robot. 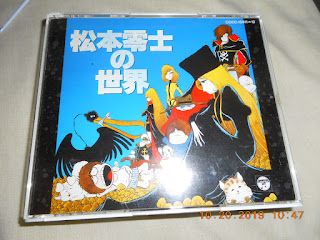 Well, I was listening to the above double-CD album, "Matsumoto Leiji no Sekai"（松本零士の世界...The World of Leiji Matsumoto）which has a lot of the anison involved with the master animator's works such as "Yamato" and "Galaxy Express 999"（銀河鉄道999）, and at the top of CD 2 were the opening and ending themes for the original "Wakusei Robo Danguard A"（惑星ロボ ダンガードA...Planetary Robot Danguard Ace）. Watching the original "Force Five" opening for "Danguard Ace" back then (and the other shows, for that matter), I quickly noted that the themes were left as empty karaoke versions instead of the totally new themes for "Gatchaman" and the just-as-impressive English-language version for the "Yamato" theme. I had wondered what the original themes sounded like.


Well, thanks to the CD and YouTube, none of us have to wonder any more. I mentioned the legendary animator Matsumoto and now here is the legendary anison singer Isao Sasaki（ささきいさお）providing the full version of "Suki da Danguard Ace" (We Love You, Danguard Ace), created by lyricist Shunya Ito（伊藤俊也）and composer Shunsuke Kikuchi（菊池俊輔）.

I read one comment saying the theme is pretty cornball (although he cherished the show), and yep, that it is, in a very sentimental way. "Suki da Danguard Ace" is the typical heroic theme song for the kids...it probably had them marching happily over the tatami. Those horns and the groovy beat would have also been just at home at the time for any variety show on Japanese TV. For me, it was a pity that the full version hadn't been provided on "Force Five" (even though admittedly it would have sounded strange for a Japanese song to be played on American morning TV) since Sasaki with help from the chorus group Young Fresh（ヤング・フレッシュ）really put in the brio in the recording booth. Those words were needed.


Could only find the ending credits version of the closing theme "Sono Na mo Takuma Uchuu Pilot" (His Name is Takuma the Space Pilot) which is slightly more urgent in tone but it has the same songwriters and Sasaki taking care of it. Still, Mom probably yelled at the kids to stop pounding the tatami into chaff. 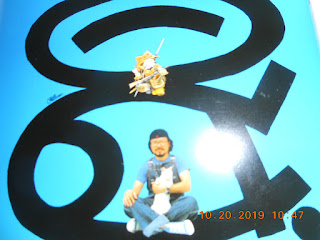