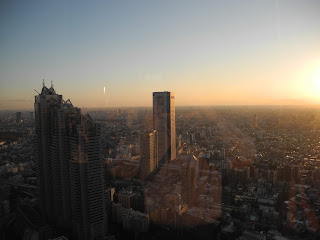 A nice late afternoon view from the Tokyo Metropolitan Government Building out to the west. Unfortunately, couldn't quite get Mt. Fuji into frame, though.


Speaking of which, apparently a few times a year, there is this phenomenon in which the sun either rises or sets virtually in perfect alignment with the peak of Mt. Fuji. Called the Diamond Fuji, if skies are in good condition, even folks in Tokyo can see it (never got the opportunity myself), with TV stations' news broadcasts making note of the effect as a lot of photographers rush out to the perfect place in the megalopolis to take their shots. Supposedly, there is one street in Tokyo that's absolutely the best site since it seems to go in a straight line due west to the mountain. I can only imagine what that must be like for the residents in the neighbourhood.


It's Diamond Fuji that comes to mind when I hear this lovely song by the duo microstar which I fell for early last year. I ended up getting their most recent album "She got the blues" (2016) on the strength and variety of their tracks, and now I'm considering tracking down their 3rd album "microstar album" which came out in May 2008 just on this particular song, "Tokyo no Sora kara" (From the Tokyo Sky).

"Tokyo no Sora kara" just seems perfectly fit for the Diamond Fuji scene whether it be at sunrise or sunset (I prefer the sunset myself), and it sounds so much of an optimistic and reassuring tune. In fact, I bet that it would be the ideal song for the satisfying end of a tough adventure. The two members of microstar, Seiki Sato and Yuko Iizumi（佐藤清喜・飯泉裕子）were responsible for this one. That refrain especially when the music bursts out like a cloud of diamond dust really does a heart good.

From the pattern of release, microstar seems to put out albums only once a decade (although the year in that decade isn't fixed), so I can only hope that Sato and Iizumi can get their 5th one out shortly into the next decade around the Olympics.
Posted by J-Canuck at 7:57 PM