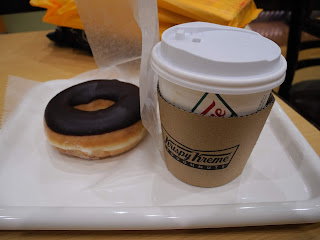 That Krispy Kreme chocolate donut and coffee as you see above was purchased and consumed at a huge food court at the Diver City mall in Odaiba, Tokyo back in 2014. It's just behind the life-sized Gundam model. The famous donut franchise had its time in North America but did a quick fade once folks realized that arteries and veins actually needed to stay intact for survival.

It then hit Japan like a meteor almost 10 years ago with Store No. 1 launching in South Shinjuku just across from the Takashimaya Times Square shopping complex. I remember that opening day well on that one Friday in December 2009; since I was in the area, I had thought that I might attempt to get one of those icing-slathered donuts although I knew with all of the hoopla from the Krispy Kreme marketing machine and the usual reaction from foodie Japanese there would probably be a lineup of about half an hour or so. Well, my prediction was completely off...it was more like a 2-hour queue! And for several more months, it would stay that way as folks from all over the nation would flock in to grab a couple of briefcase-sized boxes of cholesterol bombs. It's as if the Japanese had never heard of yeast donuts before. For me, it would take about a year before I finally ventured my way into Store No. 1 and get a donut and coffee. It was an interesting experience....the donut was indeed rich and sugary but the coffee was about as strong as an Avenger at the Battle of Earth, probably to counteract the effects of the donut. Didn't get much sleep that night.

Branches eventually started popping up like fungi all over Tokyo and certain parts of Japan in the next couple of years before I took off for home for good. However, by the time I returned for my first visit to the country in late 2014, I found out that the KK bubble had popped and interest was falling. And by the time of my next visit in 2017, Store No. 1 was gone, to be replaced by an Italian restaurant. Maybe the branch in Odaiba is perhaps the only branch left in Tokyo...not sure. But the rise and fall of Krispy Kreme didn't particularly surprise me. There was a similar phenomenon with Cinnabons prior to the KK boom. Incidentally, Cinnabons is still a fixture here at Eglinton subway station after all these years.

So, my story about Krispy Kreme in Japan was put up to introduce this sunny and contented song by the band Pink Cloud（ピンククラウド）. "Sweet My Baby" first caught my attention when I saw the video off to the side to the right of YouTube and saw that album cover with the two comical Japanese masks. With the name of Pink Cloud, I was rather intrigued.

I soon discovered that "Sweet My Baby" was one happy and funky piece of musical joy by Pink Cloud. Another revelation is that the band consisted of guitarist/vocalist Char, bassist Masayoshi "Louise Louis" Kabe（加部正義）, formerly of the Group Sounds band The Golden Cups, and drummer/vocalist Johnny Yoshinaga（ジョニー吉長）from the rock band Yellow（イエロー）. If I'm not mistaken, that is indeed Yoshinaga behind the mike for "Sweet My Baby" and he puts his own sweet soul and funk into his voice, punctuated by his "Doo-doo-bee-doo".

The song belongs to the 1982 album "Cloud Land ~ Tougenkyou"（桃源郷...Shangri-La）. Char, Kabe and Yoshinaga first got together as a trio in 1978 and simply identified themselves as JOHNNY, LOUIS & CHAR. But then, they decided to go with the new name of Pink Cloud going into 1982. Looking at their discography on J-Wiki, they were certainly prolific with their releases until the band broke up in 1994.

Right after I listened and enjoyed "Sweet My Baby", I found another Pink Cloud confection under the title of "Open Your Eyes" which came from their 1989 album "Pink Stick". It's a fun guitar-based boogie with what I think is a little mix of rockabilly and jazz. The cover bands would love this one to death.

Pink Cloud has been categorized on J-Wiki as a rock group but from listening to these two songs so far, I think Johnny, Louis & Char came up with even more in terms of their music.
Posted by J-Canuck at 11:04 PM