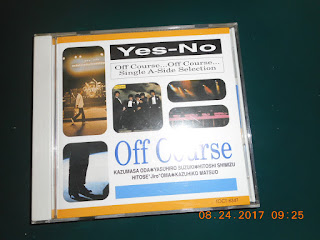 Now that we're fully into autumn, the leaves are changing, the temps are starting to fall and my mind starts wafting toward the band Off-Course（オフコース）. The reason is perhaps Pavlovian in a way...the first song that I had ever heard by Kazumasa Oda's（小田和正）old group was the lovely "Aki no Kehai"（秋の気配）, a ballad (their 11th single) that can almost force me to run toward the nearest forest this month and sigh repeatedly in introspection.

"Aki no Kehai" is a track on Off-Course's 5th album "JUNKTION" from September 1977. Also from that release is a bouncier number "Kawatte Yuku Onna" (A Changing Woman) which was written and composed by band guitarist Yasuhiro Suzuki（鈴木康博）.

With a not quite-City Pop melody that can get fans to sway slightly, I couldn't quite understand all of the lyrics but it seems to me that the happy music (nice keyboard solo by Oda, by the way) is overlaying what could be some tension between a man and a woman at a cafe about to break up. I wasn't sure whether it was an amicable separation or a parting analogous to a bee leaving a sting in an unlucky epidermis. Knowing what Off-Course ballads back in the 1970s could be like with its good dollops of sweet sorrow, I would usually go with the latter, as bittersweet as it is. However, there is something also there with the guy giving a mea culpa at the end of the song hinting that he may have been a cad who had done some extracurricular activities with another woman and fully admits that he can't help fooling around. His imminently former girlfriend has probably decided that she needs to grow out of the relationship and move on, perhaps something that the guy realizes and wishes her well for while also knowing that he is most likely incorrigible.

However as Suzuki's melody indicates, this whole scene could be playing out in some rom-com on Japanese TV. The only thing missing, of course, is the woman throwing water in the guy's face.
Posted by J-Canuck at 7:48 PM