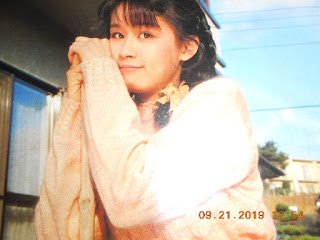 I just managed to hear a bit of her next single after "Honki", "Process", which turned out to be her most successful song. Sounded pretty promising as well, so I may be doing a bit of re-exploration of her discography.

Well, the above was written by me about "Honki"（真剣...Serious）...all the way back in August 2013! Mind you, I didn't use the word "soon" in there and I did use "may" which would get me off the hook. Still, having over six years pass by like that without any Tamura tune isn't great, and so I couldn't blame Ms. Tamura for giving me that sort of look above.


Allow me to make amends. Indeed, this is "Process" by late 80s/early 90s aidoru Eriko Tamura（田村英里子）,and it's a pretty boss tune with that guitar and bluesy sax in there. "Process" was actually the lass' 4th single (January 1990), following "Honki" which is the song that I have associated most with her.

Instead of having Takashi Matsumoto（松本隆）and Kyohei Tsutsumi（筒美京平）create the song this time like they did with "Honki", "Process" was taken care of by lyricist Masaya Ozeki（尾関昌也）and composer Ken Sato（佐藤健）. I've also picked up on that pretty speedy rhythm with keyboard work that feels a bit urban contemporary as well, so it's quite an interesting mix. As I mentioned above (or in the last Tamura article), the song was Tamura's most successful hit, as it reached No. 7 on Oricon.