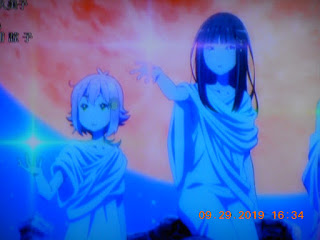 I believe the past week has been the transition into a new anime season, but looking back at the one that has just passed, my anime buddy and I have ended up seeing a small handful of action-adventure shows, and it's interesting to note their collective status. The latest series of "Symphogear" is their final one so now the heroines who literally had to sing for their suppers and their lives can now retire and collect their royalties for all those tunes. Meanwhile, "En En no Shouboutai"（炎炎ノ消防隊）and "Kimetsu no Yaiba"（鬼滅の刃）are going full bore with the former firing into a second cour of intrigue and conspiracy, while the latter will be getting the cinematic treatment and probably even a third cour.

Then there is this one other series that was designed to be one-and-done. "Granbelm"（グランベルム）was an original anime with no basis on a light novel, game or manga, and its thirteen episodes got its whole story out neatly if not too happily. I don't think it broke any molds but what it did, it did pretty well. Ironically enough, the seiyuu behind two of the heroic characters in "Symphogear" played the two deranged characters in "Granbelm".


Writing about the theme songs for "Granbelm" this late after the series has ended can probably inform you that they didn't exactly become immediate earworms to me, but they have finally started to wrap around my cerebral cortex to paraphrase an explanation from "Star Trek II". Looking at the opening credits week after week, I saw the name of the artist behind the opening theme "Tsuki wo Ou Mayonaka" (Following the Moon in the Middle of the Night) and thought it familiar.

Then, I realized that Eir Aoi（藍井エイル）was the same singer behind the first opening theme for the amazingly crazy "Kill La Kill"（キルラキル）, "Sirius", all the way back in 2013. When I wrote about that one, I noted that Aoi had stopped her career in 2016 due to illness...well, it looks like she got back into the saddle again as of early 2018, I'm happy to state. The song is her 16th single, officially released in August this year, and it peaked at No. 24. Aoi took care of the lyrics while Ryosuke Shigenaga（重永亮介）, the same fellow behind "Sirius", composed the melody.

"Tsuki wo Ou Mayonaka" brought out some nostalgia from me strangely enough when it comes to anison, but of course, I'm not talking about stuff from the 20th century. Instead, it reminds me of some of the themes which came out earlier in the decade when my buddy got me back into anime again. Of course, there is Aoi's "Sirius" but the upbeat and urgent music and the singer's delivery going into high gear in the refrain also reminded me of songs such as "Sparkling Daydream" by ZAQ, the first opening theme for "Chūnibyō demo Koi ga Shitai!"（中二病でも恋がしたい!...Love, Chunibyo & Other Delusions）; yes, Rikka's twirling fingers and Dekomori's lethal ponytails are back in my head again.


As for the ending theme, "Negai" (Desire) by Uru, it's one of those take-a-breather ballads that let viewers like me know that despite all of the carnage that took place in the episode, everything is OK and stay tuned for next week. With lyrics by the singer and music by H. Aoba and N. Sasaki, "Negai" was actually the first of the themes for "Granbelm" that I finally grew to like, primarily for Uru's breathy vocals.

Uru herself got her start from YouTube doing cover versions of songs earlier in the decade, before making her major debut in 2016, according to her J-Wiki profile. "Negai" is her 8th single released in September this year, and so far, she has one album out, "Monochrome"（モノクローム）from 2017 which peaked at the No. 18 position.
Posted by J-Canuck at 8:07 PM