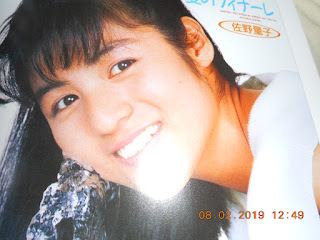 Ryoko Sano（佐野量子）was a celebrity that I only saw sporadically through various commercials (as shown in the video below) and I only knew later on that she had also been an actress, a tarento and a singer, with that final part of her career lasting between 1985 and 1992.

I found this song by Sano which was included in her final album, "Wind & Window" from January 1992. Titled "Hoshi ni Negai wo" (Wishing Upon A Star), I had initially thought that this was an 80s aidoru tune, and Sano indeed started out as an aidoru, but when I saw that the composer was pop singer Chikaco Sawada（沢田知可子）, my mind started thinking that this may have been a later release. Sano herself provided the lyrics and I think her singing style was an even more whispery version of Hiroko Yakushimaru（薬師丸ひろ子）.


Sano announced her retirement from show business at the end of 1994 and then married famed horse jockey Yutaka Take（武豊）the following year. According to Sano's J-Wiki article, she wouldn't make any more TV appearances for about 20 years but then a 2015 article on "Sponichi Annex" revealed that both Take and Sano finally appeared on a variety show. The brief video above has the Takes on a 2016 program.
Posted by J-Canuck at 10:52 PM