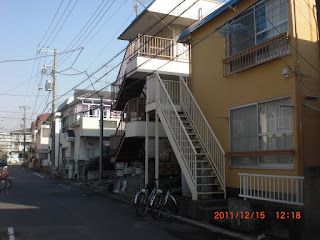 I just barely remember the first television set that I ever laid my eyes upon and that was the ancient black-and-white in our old apartment in St. James Town. Strangely enough, I do remember that it was showing "Hockey Night in Canada" with Ward Cornell as the host. However, since then it's been colour sets all the way.

Then, for all of my 17-year stint in Ichikawa, my apartment was blessed with a colour set but it was a very old TV which had knobs and dials and no remote control. It even had the bunny-ears antenna. Before you send your pity, don't bother. My living room was small enough that I could bend forward a degree from my sofa and be able to reach the knob to turn the contraption on while it was on the other side of the room. Even when I finally pulled the trigger and bought a contemporary thin-screen set at the local electronics shop, I didn't even throw away the old set. I simply moved it to the bedroom for the last few years. I'm a sentimental one, for sure. It would explain why I started the blog in the first place.


All that preamble on black-and-white and colour sets just to introduce a track from singer-songwriter Naoko Gushima's（具島直子）1996 album "miss G", "Monochrome". A trackmate of "Candy", "Monochrome" has the same sort of relaxed groove and slow funk ideal for a weekend nap at home, and it may have made for a nice antidote at the time if one were constantly listening to the dance-pop from the Tetsuya Komuro（小室哲哉）steamroller that was in full force in the mid-1990s. I had and have no problems with TRF, Tomomi Kahala（華原朋美）and Namie Amuro（安室奈美恵）but from time to time, it's nice to listen to something that can place you in an intimate coffee house rather than the dance club.

I especially like the George Benson-esque guitar that starts things off along with the hypnotism provided by Gushima's voice and the piano.
Posted by J-Canuck at 2:20 PM