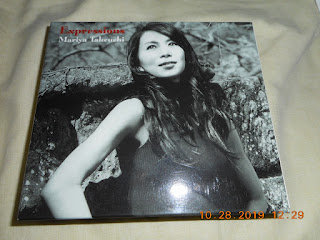 It was only relatively recently that I found out that singer-songwriter Mariya Takeuchi（竹内まりや）is the daughter of the 4th-generation owner of a long-standing ryokan called Takenoya in her hometown of Izumo City, Shimane Prefecture. Well, thinking that I may be able to visit Japan again sometime next year (though definitely not during the Olympics), the wheels started turning in my head about possibly taking that train trip over to Shimane out in the west, but looking at its website and the above video of some lucky fellow actually staying there, it looks like it's a little too rich for my blood. Gotta say, though, that the staff at Takenoya didn't hesitate to show how proud they are of Mariya.


The thing about a ryokan is that, like any hotel or motel, it's a place to rest those weary bones after a day of traveling. Takeuchi's song "Jinsei no Tobira" (The Door to Life) strikes me as having the same effect.

A coupling song to her 35th single "Chance no Maegami"（チャンスの前髪...Front Bangs of Chance）from August 2007, "Jinsei no Tobira" seems to take things back all the way to Takeuchi's beginnings as a singer with the gentle country-and-gospel arrangement. Of course, when I think of her beginnings, her debut album "Beginning" (1978) naturally comes to mind. The singer did write and compose this ode to not only the fun celebrated in the past but the better days to come, with her husband Tatsuro Yamashita（山下達郎）arranging, but the band Sentimental City Romance also had a hand in its arrangement, and they had a fair bit to do as well with "Beginning" all those decades ago. I guess it must have felt like a school reunion back in the recording booth.

"Jinsei no Tobira" and its partnering song managed to reach No. 23 on Oricon. It has also been included in Takeuchi's 10th studio album "Denim" (May 2007) and her massive BEST compilation, "Expressions" which was released a year later. I first heard the song from the latter album.


I'm sure that "Jinsei no Tobira" has had its share of covers in its decade of existence, but I found this lovely version by Lisa Ono（小野リサ）which was included in her June 2013 album "Japao 2". Of course, her take has been arranged in a relaxing bossa nova fashion.


Getting back to that trip to Takeuchi's hometown of Izumo, which by the way is also home to Izumo-Taisha Grand Shrine, one of the most important shrines in Japan, if any of you decide to stay over at Takenoya, why not splurge some more yen and go in style on the Sunrise Izumo overnight train from Tokyo? Listen to "Expressions" while you're in your berth!
Posted by J-Canuck at 11:19 PM