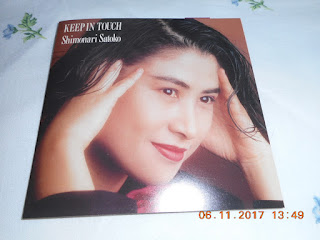 I guess that this would be the ideal autumn-flavoured City Pop tune.

"Tameiki Avenue" (Avenue of Sighs) indeed has the right tone right in its title. Satoko Shimonari's（下成佐登子）5th single from October 1981 is all about the quiet after the storm that was a sad breakup to a relationship, and isn't autumn the ideal time for the death of romance according to kayo tradition? However, the lyrics are buoyed by a fairly lighthearted bossa melody and Shimonari's delivery, and the combination is such that this could be covered nicely as well by another New Music/City Pop veteran, Junko Yagami（八神純子）. Shimonari was responsible for the music while Etsuko Kisugi（来生えつこ）took care of the lyrics.

The song is also a track on Shimonari's debut album "Aki no Ichi Nichi"（秋の一日）from  November 1981. The title track is something that I covered a couple of years ago and is much more folksy in sound. In addition, my first purchase of anything by the singer is her 1987 album "Keep In Touch", and the music there is more of a late 1980s contemporary pop release. Just from the tracks "Aki no Ichi Nichi" and today's "Tameiki Avenue", then, I would like to get my hands on the debut album for the contrast in the sound between the two albums.
Posted by J-Canuck at 2:02 PM