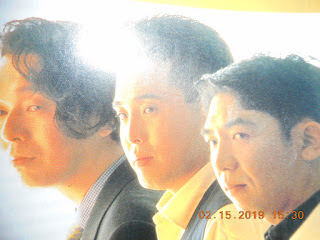 Another Friday night is upon us so to start things off, let's go with something a little downtown.


Gonna have to remember what the original recorded version was like but this video of the live version of Sing Like Talking's "Dancin' With Your Lies" is quite the jam session. A nice slab of funkiness written and composed by SLT member Chiaki Fujita（藤田千章）, the live version also throws in some rock and even a tad of jazz. The lyrics talk about living for the night life now and staving off the bad news for later...much later, perhaps.

"Dancin' With Your Lies" was actually Sing Like Talking's debut single from September 1988 and it was also on their first album "Try and Try Again" which came out later in November. It looks like SLT was already cooking right from the start of their career with their brand of urban coolness.
Posted by J-Canuck at 7:29 PM