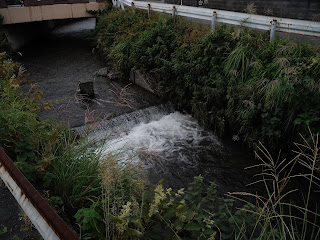 It was raining fairly steadily earlier today when I met up with friend and fellow "Kayo Kyoku Plus" collaborator Larry Chan for lunch at one of my favourite places, Kingyo. Being a Canadian, I still didn't bother putting up my umbrella; it would have to be pouring buckets outside for me to do that which is ironic since I had once been living for many years in a nation where folks opened up the brolleys at even the slightest suspicion of a drop of precipitation.

Anyways, over some hearty and warming fare at the restaurant, we were able to have some good talk on a number of topics including the blog, and of course, some of our favourite works by Akina Nakamori (tip from me: it ain't "Fushigi"). Luckily enough, by the time we left Kingyo, the weather was looking a whole lot more hopeful.


Was happy to encounter this one by singer-songwriter Gen Taneichi（種市弦）some time ago. For those who had thought that City Pop/J-AOR was gone by the 1990s, well, folks like Sing Like Talking, Original Love and this fellow ensured that this wasn't the case. According to Taneichi's website bio, he was born to a jazz bassist father and a dance teacher mother back in 1974, and then at the age of 20, he released his debut album "Fuyu no Shirabe"（冬の調べ...Winter Melodies）in October 1994.

One of the tracks from the album is "Hi no Machi no Oishii Mizu". After looking up the kanji for hi at jisho.org, I found a number of definitions, most of which revolved around "comparison" and "ratio" which seemed a bit odd when put with the rest of the title. However, there was one revelation in that that particular kanji 「此」was also used to represent the Philippines, most likely in the same manner that 「米」is used to represent the United States and 「加」for Canada. So, with some confidence, I can say that the title can be translated as "The Delicious Water of a Town in the Philippines".

Taneichi was responsible for words, music and performance of this oh-so-tasty AOR delight that sounds as if it had been made in the late 1980s. It starts out pleasantly enough but when he hits the refrain, the instruments (horns and guitar) really make contact with the sweet spot in my mind. Plus, I would like to give my kudos to Taneichi's vocals which remind me to a good extent of a younger Takao Tajima（田島貴男）from the aforementioned Original Love.

According to one other website, the album was produced by the late keyboardist Hiroshi Sato（佐藤博）, for whom Taneichi has the greatest respect, and Sato was helping out on the keyboards here for "Hi no Machi no Oishii Mizu". Masaki Matsubara（松原正樹）also contributed with his cool doodling on the guitar.

From what I could glean from Taneichi's website, he has released at least 2 singles and 2 albums and has also provided songs to acts such as SMAP and Anri（杏里）.
Posted by J-Canuck at 8:05 PM