Looking the recent editions to my YouTube "Liked Videos" playlist, I noticed a little first in all my years of music excavation: I'd actually liked 3 videos with the same song in a row. I know, I know, this hat trick is rather frivolous, but it was for a song I'd never heard of until very recently by an artiste who occasionally pops up on my radar. This song is "Hatoba Katagi" by Bin Uehara (上原敏).

Now, I was made aware of the very preppy, 1920s/1930s salaryman-like Uehara via the duet "Uramachi Jinsei" (裏町人生) with Michiko Yuki (結城道子). I love that song very much, and Uehara stuck in my mind as the Akita dude who made using minyo vocal techniques while singing ryukoka a thing and one of the many unfortunate casualties of the Pacific War, but I never really thought of sampling more of his discography that's speckled with a respectable number of evergreen hits. And then, one day I was listening to a video compilation of some of Hachiro Kasuga's pre and post war classics, "Uramachi Jinsei" included, and that was when I stumbled upon "Hatoba Katagi". Granted, I was half asleep while it played in my ears - I think I was resting before my last class of the day - but I recalled taking to the jaunty melody and effortless way Hachi nailed the vocal acrobatics the song demanded.

"Hatoba Katagi" starts at the 19:02 mark. The one before is "Uramachi Jinsei", if you're keen.

Some research later revealed that Uehara was also behind "Hatoba Katagi", at which point the extent of vocal acrobatics needed for the tune made sense. In listening to the Bin-san's original recording from 1938, his more deliberate manner of warbling gives a slight rusticity to this sailor/port-harbour song. The music arrangement also sounded more oriental with the plucking of an instrument that sounds more like a banjo than a guitar and the bit after the second stanza when the lonely violin kicks in temporarily, which was an interesting touch by composer Keio Iida (飯田景応).

An oriental-tinged hatoba number piqued my interest, and so did its gender-swapped roles in the lyrics. As far as I know, such a song topic would involve a woman seeing off her sailor lover and she'd be the one shedding tears while the sailor puts up a strong front. However, Kinya Shimada (島田磬也) seemed to have written the opposite, I believe: It's the woman who's going to set sail to a destination unknown to us, and the man who's come to see her off as promised, even if he has to do so with watery eyes. This made me wonder about how such a premise could've come about.

Considering the time period of "Hatoba Katagi" (the 1930s), many Japanese folks headed out of the economically struggling mainland in hopes of finding a better life elsewhere (the West, or the colonies). So, methinks the woman could've been whisked away to a foreign country (or minimally to a far-off part of Japan) by her family for just that, and her poor man, perhaps with his own familial obligations, has to stay behind... Of course, this is but speculation on the part of my interpretation of Bin-san's song (yes, I've decided to called him by his nickname from now on).

Aside from Hachi's version which was first released in 1971 via the album "Showa no Enka" (昭和の艶歌), the third version I had unwittingly added to my list was Yoshio Tabata's (田端義夫). For one, Batayan's the man for madorosu tunes, so him doing a cover of "Hatoba Katagi" was to be expected. The musical arrangement is truer to Bin-san's one, just that you can hear the notes from Batayan's signature electric guitar. I'm not exactly sure when it was recorded, but an album where it can be found is in "Batayan! Funauta wo Utau" (バタヤン!船歌を歌う) from 2013; I reckon it could've originally been recorded in the 60s or 70s, though. 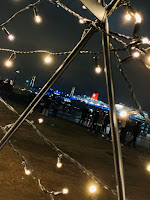 And thus, I'd like to welcome "Hatoba Katagi" to the circle of pre/post war songs that play in my head incessantly. For some reason, ryukoka from that time are particularly catchy to me.