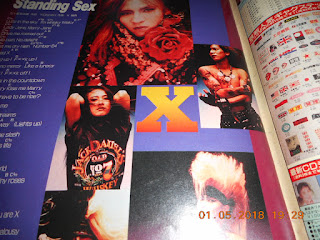 Y'know...I did get X Japan's "Forever Love" onto the blog all the way back in 2014 but it simply slipped my mind that I hadn't yet brought their other huge hit "Endless Rain" on board. Of course, I deserve a Gibbs slap for that.😬

Another matter-of-fact observation for me is that whenever I think of both of those songs, my mind will inevitably head over to former Japanese Prime Minister Junichiro Koizumi（小泉純一郎）who served in the post between 2001 and 2006. I pointed out this out in the "Forever Love" article, but Koizumi was indeed quite the character, and for a brief early time, he enjoyed this certain honeymoon of being a cool and pop culture-loving political Chief Executive. He loved his X Japan and he loved his Elvis as you can see above, although by this point (I had seen this exact footage on Japanese TV news), the love and respect for him had largely drained away and there was more of a cringe factor among local viewers when they saw him visit Graceland.

However, let me make amends for my faux pas and go into "Endless Rain". I'd seen the song performed by a whole battery of singers on last year's Kohaku Utagassen including some members of the legendary group Queen, and I think that it's not too much of an exaggeration that although I'm not an X Japan fan per se, "Endless Rain" and "Forever Love" might be two of the more iconic examples of J-Pop.

Released in December 1989 as the band's 4th single, that particular time was when I was celebrating my first Holiday season in Gunma on the JET Programme. Already realizing how Japanese pop music was transforming before my very ears, I had admittedly seen X Japan and other similar bands with some dread because of their garish makeup and the TV footage of them going absolutely bonkers on their guitars. But then again, I recollect that I had a similar initial reaction to KISS back when I was in elementary school.

It was with some surprise then that band member Yoshiki created this tender if epic rock ballad "Endless Rain" that probably would have had the late Freddie Mercury nodding in approval, and perhaps it was appropriate that Roger Taylor and Brian May joined in the cover performance of the song on NHK on New Year's Eve. That guitar solo by the late Hide reminds me so much of Queen.

According to the Wikipedia writeup (originally from a "Rolling Stone" article) for "Endless Rain", Yoshiki came up with the song after folks at Sony had seen him perform a piece by Tchaikovsky and then asked him to make a ballad. I'm just joking here but indeed if that's the case, the electronics company can perhaps pat themselves on the back for the Walkman, the PlayStation and "Endless Rain". On second thought, let's keep it to the first two things...of course, Yoshiki is fully credited for a song about someone undergoing a major emotional wringer of love lost. It's also a work that is most likely the ultimate showstopper for an X Japan concert. If the above concert footage is of any indication, every fan of the band on the planet Earth knows the lyrics from memory.

"Endless Rain" didn't hit No. 1 but it did get as high as No. 3 on the Oricon weeklies, and it went Gold, ultimately finishing 1990 as the 21st-ranked single of the year. The song also belongs to X Japan's 2nd major album "Blue Blood" from April 1989 which peaked at No. 6 and broke the million-seller barrier.