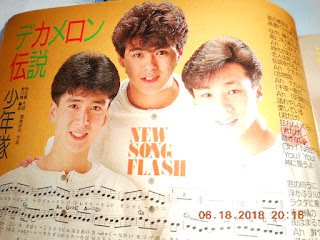 The following isn't a City Pop song by any means but it sure does give that feeling of those champagne-and-caviar times of the Bubble Era.

Must give a caveat here before I go any further since the uploader piu mosso has slapped on an age-restricted label onto the video for some reason, so most likely you may have to head to YouTube itself to view this. And that would be a pity since "Maittane Kon'ya" (Tonight's Tough, Ain't It?) is quite the stylish jazz piece for the Johnny's aidoru group Shonentai（少年隊）. Released as their 14th single in June 1989, it's got quite the "Guys n' Dolls" thing going for it as the protagonist of the piece, an urban and urbane swinger, may have met his match in a woman who leaves him internally gasping for air (externally, he's gotta maintain that urbanity).

It's not everyday that I hear some good ol' swing as applied to an aidoru group so "Maittane Kon'ya" is nice to hear, so I have to offer my compliments to lyricist/composer Tomo Miyashita（宮下智）. I've also noticed that there's a bit of "Mack the Knife" in the song, too. It hit No. 1 on Oricon (their 11th No. 1) and managed to become the 42nd-ranked single of 1989. Not only that, but Shonentai was able to appear on that year's Kohaku Utagassen to perform the song, their 4th of 8 straight appearances on the NHK New Year's Eve special. "Maittane Kon'ya" first appeared on an album via "Shonentai 35th Anniversary BEST" released in December 2020 which got as high as No. 4 on the Oricon weeklies.