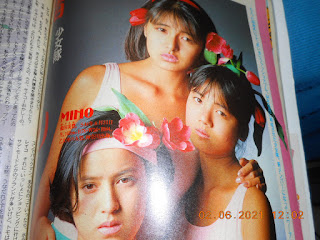 Starting off this weekend on "Kayo Kyoku Plus" with a brief tangent into another area of my interests, namely the Marvel Cinematic Universe, although I haven't subscribed to Disney+, it has been impossible for me to avoid what's been the latest buzz, post-"Avengers: Endgame" through the first of the Phase Four film and TV show entities, "WandaVision". Wham scenes and lines have been popping up all over and the most recent episode, Episode 5, have had the reactors on those reaction videos losing their minds and possibly their bodily fluids.
I've noticed that "WandaVision" has been paying homage to the sitcoms of the past right down to the theme song stylings over the decades. For that, give thanks to Robert Lopez and Kristen Anderson-Lopez who came up with those different themes for the episodes thus far, but I also want to acknowledge Canadian composer Christophe Beck for the overall score since he also whipped up one of my favourite hero themes in the MCU, that for "Ant-Man". I think that was a nice homage to 70s cop shows, especially since "Ant-Man" co-star Michael Douglas was in one of those, too.
Not sure who came up with the music for the trailers advertising "WandaVision", but one of the trailers has adapted the classic 1967 "Daydream Believer" originally done by The Monkees, and being someone who used to watch their TV show on Saturday afternoons as a kid, I know the song really well. In any case, my compliments to whoever came up with the "WandaVision" version of the song with the epic Marvel touches.
I can imagine that the sunshine-y pop of "Daydream Believer" was enough for plenty of singers to record their covers, and off the top of my head, I know that Canada's Anne Murray was one of them. A ton of singers in Japan also did their takes on it including Hideki Saijo（西城秀樹）, Akiko Yano（矢野顕子）and Finger 5（フィンガー5）, perhaps under the original title or simply through "Daydream".
The 1980s aidoru group Shojotai（少女隊）provided their cute-as-all-heck cover of "Daydream Believer" in their 1986 Xmas Day-released album "SUPER VARIO" (oh, one letter away from video game legend). An album of cover versions of non-Japanese songs, this version has the added subtitle (translated) of "I Hate 5th Period English Class" (I guess the girls didn't have me as their teacher!) and Japanese lyrics provided by Ren Takayanagi（高柳恋）. Despite their antipathy toward my old career, they have done a pretty nice take on The Monkees song.
Up in the thumbnail photo at the top which I took from an old "Myojo"（明星）magazine, the ladies are from top down, Reiko, Miho and Tomo. This is the second Shojotai article thus far in KKP and in the first article for their "Motto Charleston"（もっとチャールストン）, I rather threw out the members' names without any context since for a group that has been remembered as a trio, there were actually four names.
According to the J-Wiki article for Shojotai, the group had started out with Miho, Reiko and Chiiko, but in 1985, Chiiko suffered a hernia of her spinal disc in August 1985 which necessitated her retirement from the group, and so Tomo replaced her. Incidentally, Tomo was born as Tomoko Hikita（引田智子）and is the daughter of the late magician Isao Hikita（引田功）, aka Tenko Hikita I（引田天功 (初代)）. The magician trained a young aidoru named Mari Asakaze（朝風まり）, nee Mariko Itakura（板倉満里子）, who became Tenko Hikita II（二代目・引田天功）. She's better known outside of Japan as the illusionist Princess Tenko.
Posted by J-Canuck at 3:02 PM