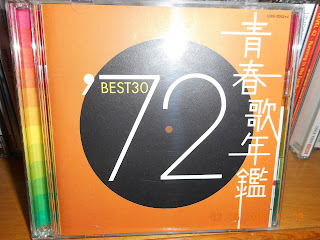 As I mentioned for singer-songwriter Hiroko Taniyama's（谷山浩子）first song on "Kayo Kyoku Plus" under her name, "Yoru no Buranko"（夜のブランコ）, she's been someone that I've heard for years in the songwriting category for other singers. But indeed, she has also put out her own songs for just as long.

I also said that she put out her debut single in April 1972 just before turning 16 years of age, "Ginga Kei wa Yappari Mawatteru"（The Galaxy Does Turn）. According to her J-Wiki profile, she hadn't intended to be singing behind the mike in any official capacity, being content with her dream of becoming a composer instead, but when a director at King Records plied her with the promise of putting out an LP for her if she would sing, she apparently changed her mind.

So as a high school student, her first single was released. Written, composed and recorded by Taniyama, "Ginga Kei wa Yappari Mawatteru" is a curious little animal of a ditty with an opening reminiscent of the theme song from "The Odd Couple" and the adorably soft vocals by Taniyama herself. It's got a shuffling beat while the lyrics are fairly playfully nihilistic as the singer relates her tongue-in-cheek beliefs that even if Earth goes poof, the Milky Way will still be around. Well, I'm sure that the Vulcans, the Andorians and the Tellarites can breathe a sigh of relief.