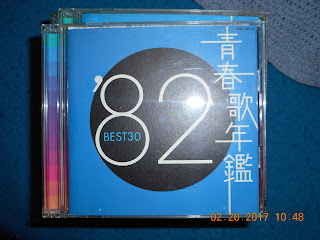 Wow! What a difference 6 years make. I did know that the late jazz fusion guitarist Ryo Kawasaki（川崎燎）was the same fellow who came up with the Kawasaki Synthesizer when I was looking some of his biography up, so that the electronica had always been within him, but back in 1976 with his "Raisins" in his "Juice" LP, it was all about the fusion.

However in 1982, he came out with the album "RYO: Aranjuez Kyousoukyoku"（アランフェス協奏曲...Ryo: Featuring "Concierto De Aranjuez" ）and one of the tracks there is "Hawaiian Caravan", and nope, it's not a relaxing AOR or fusion number with honey-toned saxes or soft guitars. I was rather taken aback when I first listened to this one because I was almost immediately greeted with this truly robotic synthesizer that was closer to Kraftwerk than Casiopea. In fact, I'd say that "Hawaiian Caravan" would have been another potential theme song for the "Sprockets" segment on "Saturday Night Live". And yep, the actual theme for "Sprockets" was an altered take on a Kraftwerk tune.

Still, as "Hawaiian Caravan" moves along, Kawasaki's guitar slowly breaks through the techno layer with its own mysterious and exploratory melody. I don't particularly want to stroll along Waikiki Beach as I listen to this one; this is more like going through an electronics convention in downtown Honolulu.