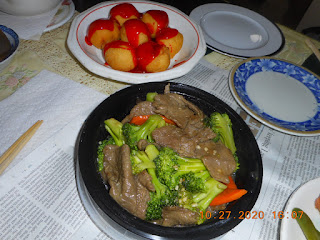 In the spirit of full disclosure, I've actually liked broccoli for decades whether the vegetable has been in a salad or just plain steamed, so any attempts at mesmerizing me into ingesting it would have been useless. Preaching to the converted, it would have been.

However, my anime buddy a few months ago cottoned me onto a Fall 2020 anime called "Ochikobore Fruit Tart"（おちこぼれフルーツタルト...Dropout Idol Fruit Tart）, a wacky comedy show adapted from a four-panel manga. It deals with a group of high school girls being groomed into aidoru with all sorts of fetishes and phobias being discovered among the ladies. Specifically though, my old friend told me about an earworm that started life as an insert song or as an aural bugbear for one of the characters, former child star Roko Sekino（関野ロコ）who gained fame for singing this wonderfully infectious campaign song touting broccoli...much to her trauma.

Well, it did a number on me as well as other folks according to YouTube, and after several weeks of wondering and waiting, "Broko no Uta" (The Broccoli Song) has finally made it in full onto the platform. Seiyuu Risa Kubota（久保田梨沙）as Roko handles the adorable vocals of making sure to chew on the springy veggie for happiness and health. Anison lyricist Sasa Ando（安藤紗々）and composer Eiko Shimamiya（島みやえい子）were responsible for "Broko no Uta" while Ginnojo Hoshine（星銀乃丈）took care of all of the arrangements along with that ghostly backing vocoder complimenting young Roko in the song.

Again, the song wasn't needed to convince me of the taste of broccoli but it's nice to know that the vegetable now has an ally in its corner in the form of this earworm.