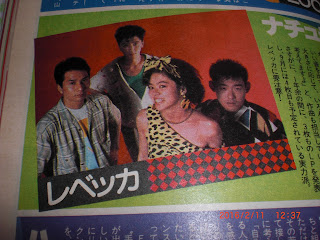 Yup, once again it is Groundhog Day today. February 2nd is the day that we find out whether we get an early spring or 6 more weeks of winter, and this Groundhog Day has a bit more meaning since during these pandemic days, we're all wondering whether we can have some more normalcy with restaurants and stores opening up in tandem with the warmer weather. As it turns out, our Canadian representatives, Wiarton Willie (above) and Shubenacadie Sam did NOT see their shadow today so the green season is coming sooner than usual (fingers crossed) while Punxsutawney Phil down in Pennsylvania did see his shadow so perhaps another month and a half of the cold season down Stateside. I'm more than happy to back up our national rodents.💚

I thought that the above would be the ideal time and place to put up pop/rock band Rebecca's（レベッカ）"Nervous but Glamorous" to reflect the rather bemused attitude that a famed groundhog might have about being raised several centimetres above the ground when it would prefer enjoying rest in its burrow. Anyhow, this was Rebecca's 8th single from November 1987, and it's got a nice brio-filled strut to it. To be honest, it doesn't really hit me as a rock song per se...it's more of a sultry and funky pop tune, maybe even a City Pop one.

Vocalist NOKKO and Rebecca keyboardist Akio Dobashi（土橋安騎夫）created the song and it seems that NOKKO's lyrics describe the story of the day after some intense romancing, if you know what I mean, but you can take a look at one translation at J Pop Asia. There was some nice sax there, too....yes, that wasn't a typo, I meant "saxophone". An English-language version was done for the band's 2nd remix album "OLIVE" released in August 1988. Peggy Stanziale provided the lyrics there.

Nope, no groundhogs in this ad, but "Nervous but Glamorous" was used for a Sony commercial. It looks like Rebecca was performing on an Escher-designed group of brownstones.

"Nervous but Glamorous" peaked at No. 7 on Oricon and was originally on their 6th album "Poison" which came out at the same time as the single. This hit No. 1 on the charts and ended up as the 7th-ranked album for 1988. "Poison" was also given a Japan Gold Disc Award for Best Album of the Year in the same year in the rock genre. As for "OLIVE", that also hit the top of the charts and became the 21st-ranked album for 1988.