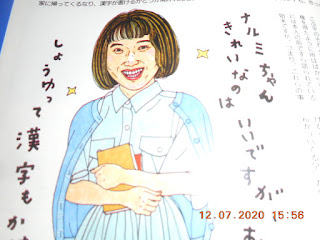 Welcome to the beginning of another work week. It has been a very frigid start and I know that for a fact because I had to go out for the grocery shopping earlier this morning, and if I'm not mistaken, there was only a single degree Fahrenheit out there (-17 degrees Celsius). So, it's plenty cold but for some good news, it seems as if my province of Ontario has decided to very slowly re-open the economy although Toronto won't be feeling the warmth for a couple of weeks yet at least.

It's quite hard to believe that September 2013 was the time when contributor nikala wrote up the only Narumi Yasuda（安田成美）article for what is arguably her most famous song "Kaze no Tani no Nausicaa" (風の谷のナウシカ) from the Studio Ghibli movie of the same name. I had heard that Yasuda had provided songs in the 1980s but my only memories of her involved her time as a full-time actress on dramas such as "Sugao no Mama de"（素顔のままで）. Yet, I'm more than happy to provide my own first Yasuda yarn.

As nikala stated in her article, aidoru-age Yasuda wasn't the strongest of singers but I certainly don't mind the arrangement surrounding her 3rd single, "Toumei na Orange" (Clear Orange) from July 1984. Composed by singer-songwriter Yoshitaka Minami（南佳孝）and arranged by Motoki Funayama（船山基紀）as a spacey technopop-jazz tune (I can pick up on the very brief "In The Mood" tribute), the lyrics by Takashi Matsumoto（松本隆）tell the story of a coquettish mermaid entrancing the fellow who's been staring at her beauty, among other things.

"Toumei na Orange" didn't get onto either of her two studio albums but it was included on her first BEST compilation which came out in November 1984.