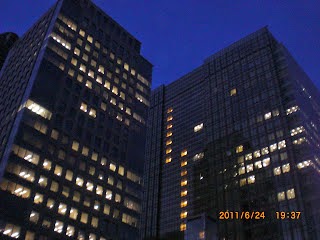 May have to look a little more closely next time around at the liner notes for "Thru Traffic", the one-off classic 1982 City Pop album created by Tohoku Shinkansen（東北新幹線）which consisted of musicians/songwriters Etsuko Yamakawa（山川恵津子）and the late Hiroshi Narumi（鳴海寛）. I've loved the album and was so glad when I was able to acquire a copy of it some years ago. When I heard the first track that I ever heard from "Thru Traffic", "Tsuki ni Yorisotte"（月に寄りそって）, my fate was sealed.

However, my assumption had been that Narumin and Etsu were always in the back office, so to speak, simply writing music and helping out in recording booths on instruments as session musicians at the Yamaha Music Foundation all that time. But I only found out last night that both people had been active in a New Music band known as Melting Pot（メルティングポット）which lasted between 1977 and early 1984. There's even a J-Wiki article on them. Mind you though , the duo who would create Tohoku Shinkansen were not front and centre, with Narumin being the second guitar between 1980 and 1983 and Etsu being a keyboardist between 1979 and 1983. Both also helped out in backing vocals.

Leader and guitarist Hideaki Yahagi（矢萩秀明）, bassist Toshinori Fujioka（藤岡敏則）, keyboardist Masahiro Miyazaki（宮崎まさひろ）, all of whom were also working at the Yamaha Music Foundation, got together with keyboardist Shuuji Tashiro（田代修二）and Latin percussionist Masatoshi Hiyama（桧山正利）to initially form the group, Yahagi Band（矢萩バンド）. They would become the backup band for singer-songwriter Junko Yagami（八神純子）and Yahagi was then asked to change the name. The leader was reading a music magazine article on fusion pianist Joe Sample in which he basically said that New York was a melting pot which had Yahagi realizing that the members of his own group had their own differences so the band became Melting Pot, according to that J-Wiki article. I'm not sure how they started out but over time, it was respected for its provision of refined urban pop. Along with the future Tohoku Shinkansen, there were other members who came and went, and speaking of Yagami, Melting Pot backed up the singer when she made that Kohaku Utagassen appearance in 1980 for her hit "Purpletown"（パープルタウン）.

Just one album, a live performance release, was released but in June 2017, some 33 years following Melting Pot's breakup. Titled "Melting Pot featuring Narumi Hiroshi Live at Egg-man +", the record shop Merurido site reports that the tracks all stem from the band's 1983 performance at the famous Shibuya live house Eggman, which is why I've put both of those two years in the Labels.

The first track, another Rocket Brown recommendation, that I've encountered is "Nakushitamono ga Ohsugiru" (Too Many Things I've Lost) , one banger of a City Pop tune. It goes down nice and smooth, and with Narumin on vocals, it frankly sounds like an extra track on "Thru Traffic". I do love the cool and mellow Fender Rhodes, the wailing guitar solo and of course, the vocalist. There's also some splendid bluesy guitar to finish things off. I have to compliment the producers of the record since it doesn't sound like a concert recording but something that had been created in a record studio. I will definitely have to check out some of the other tracks, but if this was indeed Narumin's last hurrah with Melting Pot, he definitely left on a high note.