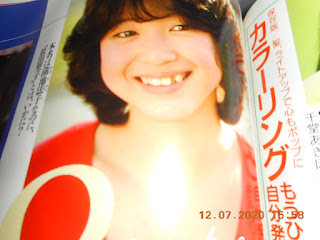 Just some minutes ago, I was thinking about how things changed in aidoru-dom going from the 1970s into the 1980s with the departure of aidoru legend Momoe Yamaguchi（山口百恵）and the entry of aidoru legend Seiko Matsuda（松田聖子）. Then, I realized that Momoe hadn't left the microphone on the stage before Seiko-chan took it up like the passing of a baton. There was some overlap. The latter person debuted with "Hadashi no Kisetsu"（裸足の季節）on April Fool's Day in 1980 while the former didn't release her final single before retirement until November of that year.

It must have been quite the thing for pop culture watchers at the time to see those several months between April and November with the differing styles of Momoe and Seiko at the same time. According to the J-Wiki article for "Hadashi no Kisetsu", there was some sort of media headline which stated Seiko was the new outstanding talent to arrive in a post-Momoe world. Couldn't imagine how that must have felt to the new aidoru.

The article on "Hadashi no Kisetsu" has been up on KKP since early 2015 and I did note some of the sturm und drang surrounding this Single No. 1 for Matsuda. Apparently, the catchphrase for the young Noriko Kamachi（蒲池法子）was "Dakishimetai, Miss Sony"（抱きしめたい ミスソニー...I want to hold you, Miss Sony） in reference to her since she was debuting under the Sony label.

Hopefully, things were more peaceful for her when she was recording the B-side to "Hadashi no Kisetsu", "RAINBOW ~ Roku-gatsu Umare" (Born in June). This flip side is indeed slightly mellower than the A-side as the setting involves a young girl sitting in her bedroom getting bedroom eyes over a boy. Written by the same lyricist who provided the words for "Hadashi no Kisetsu", Yoshiko Miura（三浦徳子）, while the music this time was created by Jukichi Moriie（森家住吉）with Kei Wakakusa（若草恵）arranging the whole ball of wax.

I've probably said it in past Seiko articles but I'll say it again. As much as I've loved the hits of Seiko at her peak going further into the 1980s, her early material featuring the somewhat different vocals of the aidoru will always be appealingly poignant.