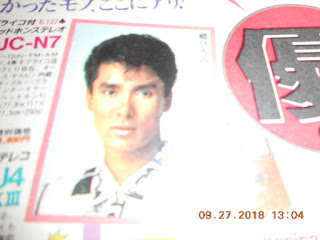 The last time I wrote about heartthrob Hiromi Go（郷ひろみ）was about a year ago when I took a look at his 1983 album "Hiromi-kyo no Hanzai"（比呂魅卿の犯罪）, his tour-de-force collection of songs of City Pop and technopop extraction with able assistance from the guys at Yellow Magic Orchestra.

However, this time around, I'm taking things back to his 1970s aidoru roots although not too far back since I'll be writing about his December 1978 29th single "Chijo no Koibito" (Lover on Earth). Recently departed legendary composer Kyohei Tsutsumi（筒美京平）whipped up the somewhat mysterious melody and also handled the arrangement which initially sounds like something for a Sergio Leone western, although looking at the single cover with Go trying to go for the appearance of a young and feisty cop with a chip on his shoulder, maybe I ought to change my initial impression.

The lyrics were created by Yoko Aki（阿木燿子）, the same lyricist behind all those latter-era Momoe Yamaguchi（山口百恵）hits, and although I couldn't find them anywhere online, from catching some of the lines, I think "Chijo no Koibito" may actually be more about a rather intimidating femme fatale that Go can't quite help but fall in love with. No matter which setting I go with, though, there's plenty of intrigue and drama in this one. The song managed to peak at No. 17 on Oricon.