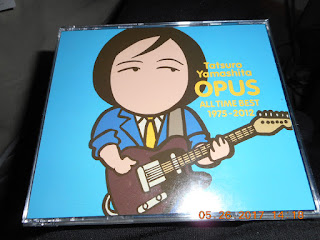 Never thought I'd say this but Tatsuro Yamashita（山下達郎）and I have something in common!
First off, though, I was scrolling through the Discord City Pop server under Masa -Neo City Pop- earlier today when I saw Sanok put up a Happy Birthday for Tats himself. Indeed, February 4th is the singer-songwriter's birthday and he just turned 68 years young! Then when I entered the chat with Sanok and Rocket Brown, the host of "Come Along Radio" some minutes later, I asked the latter for a recommendation because I was planning to write about another song by Yamashita in commemoration of the special day.
Rocket recommended this particular track from Yamashita's 9th studio album which came out in October 1988, "Boku no Naka no Shonen"（僕の中の少年...The Boy Inside Me）. Titled "Soubou", the second kanji in there probably makes the expression a fairly rare word but according to Jisho.org, it means "the people" or "the public".
As for how "Soubou" came to be, that links with that first bold statement that I made up at the top. The J-Wiki article about the album has a very large and detailed explanation for that particular track, and the first part of that huge paragraph explains that back in the 1980s, Yamashita pointed out that he was going back and forth between Tokyo and Los Angeles frequently and while he was there, he used to tape music from the local FM station KJLH. One day, after coming back home and listening to the cassette, he came across one song that really moved him but he didn't know the singer or the title, and eventually Tats lost the tape, but the essence of that mystery song stuck in his head like flypaper.
During that same decade as a high school student, I was doing my fair share of taping music from both AM and FM radio, and there were indeed tunes on my old Canadian Tire cassettes for which I could never find the titles or the singers behind them so they've stayed mystery songs that have remained in my own noggin for decades. That has been true for both kayo from Japan and songs from the United States or Canada or the United Kingdom. However in the singer-songwriter's case, he did something about it.
Yamashita took that essence and decided to make a song containing that feeling, although he said that the finished product sounded nothing like what he had originally heard. That song is "Soubou", a very inspirational ballad about moving ahead in life forthrightly that would probably make for the ideal final song at one of his concerts. Later in the massive paragraph, though I didn't bother too deeply to translate the entire thing, Yamashita seems to hint at some trepidation about creating a song that sounded rather close to gospel since he wasn't Christian and his statements suggested that he was concerned about perhaps sounding insincere when singing "Soubou" although he has said that he does listen to the genre (if folks who can read the J-Wiki article feel that I have misinterpreted that section, please let me know).
I don't know when Yamashita made those remarks and maybe he has come to some sort of resolution about it since the song is not only complete but probably has been performed many many times since its 1988 debut, but I can remark that I have had no problems with him singing the wonderful "Soubou". He did mention about its strong spiritual elements which I don't think need any particular official religious anchor. "Soubou" is a ballad that moves and soothes, and I think listeners (even an atheist like me) can appreciate it for what it is without any connection to religion.
Another interesting point that I found in the paragraph was that near the end of "Soubou", there was the chorus coming in with their "La, la, la". Yamashita thought it would be nice to have that part in there, and so he asked Southern All Stars' members and real-life couple Keisuke Kuwata（桑田佳祐）and Yuko Hara（原由子）to join his own wife, Mariya Takeuchi（竹内まりや）, to provide the chorus.
To be honest, I have heard the song before, and unlike Yamashita's experiences with that mystery song on KJLH, I could obviously and immediately recognize the singer behind "Soubou" although I didn't know the title until Rocket told me earlier this afternoon. And where I first heard it was on a JACCS card commercial almost a decade after its appearance on "Boku no Naka no Shonen" in the 1990s.
Then, "Soubou" was even used as the theme song for the 2016 PlayStation 4 game "Ryu ga Gotoku 6 ~ Inochi no Uta"（龍が如く6 命の詩。...Yakuza 6: The Song of Life） which fit well with the story of the main character, Kazuma Kiryu.
In any case, I hope that Tatsuro Yamashita has had a safe and happy birthday although I realize as I type this, it's now February the 5th in Tokyo. That's quite the story behind "Soubou" and I think the singer is the type that perhaps thrives well on the analogy of the oyster and pearl. "Soubou" is something that arose out of the distraction of an American tune he couldn't identify, and "Christmas Eve" is arguably the most famous J-Xmas song which was born since he himself got irritated over getting labeled as "that summer song guy".
Posted by J-Canuck at 10:12 PM