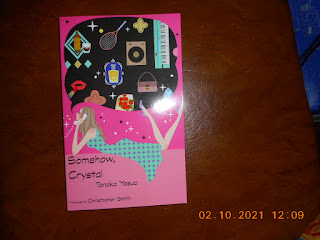 When I got my invitation to come onto the "Tokyo House Party" talk about a month ago, I discovered the theme for the show on February 27th is to be the pop culture of the Bubble Era, those five years at the end of the 1980s which had the Japanese going through money like me going through a can of Pringles (yes, I'm quite ravenous about my potato chips). As such, I decided to get a translated copy of Yasuo Tanaka's（田中康夫）"Nantonaku, Crystal" (Somehow, Crystal).

The reason for the purchase was three-fold: 1) I'd heard about this 1981 Bungei Prize-winning novel by the future governor of Nagano Prefecture (2000-2006) ever since I was in university, 2) the story was all about the rich, footloose and fancy-free life of college-age students in Tokyo, a topic that I'd been interested in ever since that graduation trip to the nation that occurred, coincidentally enough, in that same year, and 3) I thought that reading the book would help give me some more insights about those times when Saira, Derrick and I start chatting on Saturday.

I'd already read a few reviews about "Nantonaku, Crystal" and they were wide-ranging. My feelings on the novel are that I was frankly surprised that it actually won the Bungei Prize since it's not particularly a long story (half of it consists of somewhat snarky footnotes by Tanaka) and it barely has any plot, and I've always thought that the judging panels for literature in Japan were a pretty starchy conservative lot. It truly is a slice-of-life book and the story ends very abruptly.

There aren't many characters in the 137 pages of the book (including footnote pages) but the story centers around a college student and part-time model Yuri and her days and nights of enjoying in a very blasé manner the life of shopping, dancing and fooling about. What was interesting for me was the amount of name-dropping that she does in terms of the famous shops, restaurants and even the West Coast AOR stars such as Michael Franks and Airplay that were coming into the local radio stations and record shops (plus some mention of the Japanese singers of the time).

For a book that was issued in the early 1980s, "Nantonaku, Crystal" struck me as something that would have also described life during the Bubble Era between 1985 and 1990 which made me wonder whether Japan was already having the time of its life from the beginning of the decade. It also made me think about how things must have been truly like at the height of the Bubble with super-expensive gold-flecked coffee and purchases of overseas properties.

"Nantonaku, Crystal" has stuck in my head all these years because the book apparently had such an influence that the media crowned that generation of college girls of the time as the "Crystal Tribe", whether or not the members of such a tribe particularly appreciated the label. And indeed a movie came out of the book in the same year; the video above has the first few minutes with Kazuko Kato（かとうかずこ）playing Yuri. Not surprisingly, the song that plays is an AOR tune: "I Go Crazy" by Paul Davis. According to the J-Wiki article on the novel, the soundtrack consists of such songs.

When I saw actor Kyohei Shibata's（柴田恭兵）name in the J-Wiki article, I naturally assumed that with his charisma and looks, he was the other star of the film adaptation. Nothing of the sort. His only contribution was his 5th single, "Nantonaku, Crystal", that was released in April 1981. It had been advertised as the main theme of the movie, but it actually never shows up in it at all, despite author Tanaka providing the lyrics against Haruo Chikada's（近田春夫）melody.

Speaking of the melody, "Nantonaku, Crystal" the song doesn't really come across as a City Pop or AOR tune (which may have explained why it wasn't used in the movie proper), but that impressive piano rumbling away adds some New Music flavour. I'd say that it probably would be ideal for one of those cop shows that Shibata was appearing in.

In any case, to sum up, I've let you know about the idiosyncrasies of "Nantonaku, Crystal" but if you are OK with the overall premise it and/or if you can find it in a library somewhere, have a look. 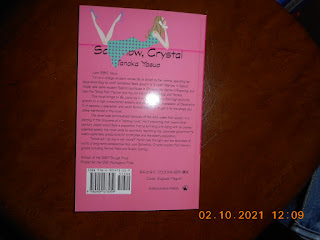