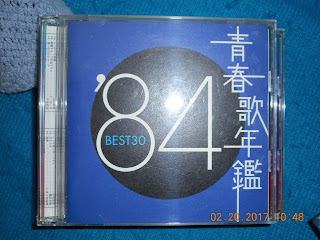 This is another one of those "one & done" singers who inhabit the deep underwater recesses of my kayo kyoku iceberg. I couldn't find much information aside from scraps here and there but according to the Waltz Online site, Rie Murakami（村上リエ）only released the one album "Sahara" in 1984 before disappearing from view. But thanks to the wonders of YouTube and the renaissance of City Pop for the entire planet, "Sahara" has begun to flourish.

Not sure if the site were complimenting or criticizing the choice but the writer noted that the cover for "Sahara" looked more appropriate for an aidoru album. However, Murakami's sole outing is described as Japanese-style urban soul, so I gather that City Pop would be a good genre title here. And one track "Say Cheese", from the flowing strings to the mellow jangling guitar to the bass-piano combination, takes me back to 1970s Boz Scaggs and Bobby Caldwell. I'd also like to send my good thoughts to the electric guitar solo, and overall, the effect is that of a very comfy metropolitan strut.

Linda Hennrick provided the English lyrics while Masahiro Ando（安藤まさひろ）, the leader of fusion band The Square, came up with the really pleasant City Pop melody. I kinda wonder whether the rhythm track for "Say Cheese" was made into the theme song for Masa -Neo CityPop's videos.