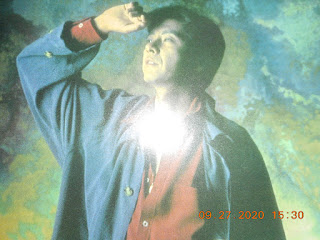 First off, I'm hoping that everyone in the Kanto and Tohoku regions are doing OK following the strong earthquake that hit the areas earlier today. Still early hours but let's wish that any injuries or damage are fairly minor.

In any case, let's get onto the Saturday round of KKP. Happy Chinese New Year to everyone, by the way. Our family didn't enjoy any of the special dishes, mind you, but taking out from Swiss Chalet was good enough for us, but I got a message from my anime buddy that he and his family did savor their Peking Duck.

Also, I almost forgot that tomorrow is Valentine's Day. 💓💓For a geek like me, that's pretty easy. However, I did remember and so, I ought to put up something appropriate. So why not go for the Japanese heartthrob, Hideki Saijo（西城秀樹）and his "Love Together", a track from his March 1984 album "GENTLE A MAN"?

This is about as 80s a love ballad duet that I've ever heard from Japan, and 80s pop in Canada and America did have plenty of love duets. From my memory of the old radio, I remember songs such as "You're Lookin' Like Love To Me" by Roberta Flack & Peabo Bryson, "The Next Time I Fall" by Amy Grant & Peter Cetera, and "Up Where We Belong" by Joe Cocker & Jennifer Warnes.

Well, "Love Together" has also got that smooth and slick arrangement for the mellow melody by Yoichi Takizawa（滝沢洋一）and the lyrics by Sonomi Ari（ありそのみ）. Images of sunset beach walks and seaside dinners by candlelight come to mind. The only thing that was the grit of sand in the oyster is that I didn't know who Saijo's singing partner was in "Love Together". I tried looking it up in the J-Wiki article for the album and at the usual sites that have sold the album, but nothing popped up.

Then, I found this performance on TV by Saijo and his singing partner, and according to the uploader, Reiko Chime, via the comments, the lady is identified simply as Akko-chan who is a backup singer. One commenter also noted that she looked rather nervous up there with Hideki (which was probably a frequent occupational hazard), but I think that Akko-chan handled herself with aplomb. In any case, for all of those Hideki fans on Twitter...and I know that you're out there...if you know what the full name of Akko-chan is, please let me know.
A version of "Love Together" was recorded onto his September 1984 album "Just Run '84 Hideki" which showcased his 11th appearance at the Budokan in Tokyo.
P.S. I'm writing this some hours following the original article, and indeed, those Hideki fans on Twitter did let me know. According to the liner notes of his 1986 album "Strangers in the Night", Akko-chan is known as Akiko Suzuki or Chiba-Chaka. Many thanks to goldenearrigs!
Posted by J-Canuck at 3:35 PM