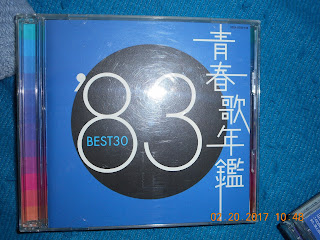 Yellow Magic Orchestra was a band that initially put out its songs as fun little ditties of past genres such as surf rock and exotica transported through a technopop filter before looking a little harder into the synthesizers and sequencers as they entered the 1980s.

Meanwhile, although I don't have as much knowledge about the New Wave/synthpop band Ippu-Do（一風堂）, which had its 1979-1984 run, I think vocalist Masami Tsuchiya（土屋昌巳）retained some of that exotica within his group throughout those five years, notably with their 1982 big hit "Sumire September Love" (すみれ September Love).

A couple of singles later, in April 1983, Ippu-Do released their 8th single "African Nights". The title and Takashi Nakahata's（仲畑貴志）lyrics about a romance trying to launch through Tsuchiya's light and seductive vocals may be within Africa, but there's something about Tsuchiya's melody that seems to hint more at that Singapore or Hong Kong bar in the 1930s...again through that technopop filter. But the atmosphere isn't anywhere nearly as thick as the smoke that must have filled those drinking establishments back in the day; it's nice and airy thanks to those instruments which I believe includes a melodica as well. Incidentally, the song is also on the band's July 1983 original final album, "Night Mirage".