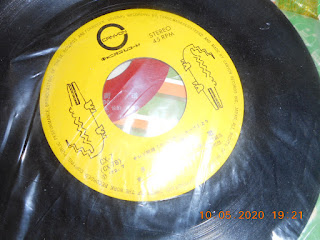 Ahh...it's truly a pity that I lost the single cover for the "Ultraman Ace"（ウルトラマンA）theme so many years ago. It was kakkoii with the tokusatsu hero front and centre performing that famous Ultraman pose with the right fist and arm outstretched toward the viewer while their left counterparts were coiled down, ready to strike themselves.

I wrote the article on the triumphant theme song for "Ultraman Ace" back in 2013 and mentioned that during our very first trip to Japan in 1972, my brother and I enjoyed the show of Ace battling the evil monsters with his array of beams while the defense organization connected with him, TAC (standing for Terrible Monster Attacking Crew), was helping out with its own arsenal.

Of course, it was Ultraman Ace that we came to see weekly but I gotta admit that I hadn't been aware that TAC had so many weapons and ships at its disposal to make the Thunderbirds take notice. I mean, the force had the TAC Falcon, the TAC Arrow and the Golden Hawk among other vehicles. What's not to admire?

TAC also had its own kickass song to match the one for "Ultraman Ace", simply called "TAC no Uta" (The TAC Song). According to J-Wiki, the original version had been recorded by vocal group Honey Knights（ハニー・ナイツ）with The Misuzu Children's Choral Group（みすず児童合唱団）but the video above apparently features a cover version with that same vocal group but instead of Misuzu, it's the Columbia Yurikago Kai（コロムビアゆりかご会）instead.

"TAC no Uta" was written by Kyoichi Azuma（東京一）and composed/arranged by Toru Fuyuki（冬木透）, the same duo behind the "Mirror Man"（ミラーマン）theme, and the song parallels the "Ultraman Ace" march in its progression with the opening grim trouble-is-brewing half before the major-chord winning latter half. Strangely enough, I think the "Avengers" theme may share some genes in that respect despite its decades-later creation.

My record with both the "Ultraman Ace" theme and "TAC no Uta" that my mother had bought back in 1972 may have been yet another more subdued cover since I don't really recollect hearing in my 45" Honey Knights' "wan dabadaba wan dabadaba" scatting which peppers the arrangement. Supposedly it was quite the thing for their scatting to populate a number of the tokusatsu themes they performed on, with the "Wan Daba" phenomenon even getting its own article on J-Wiki. I have to say that it does beef up the song quite a lot.