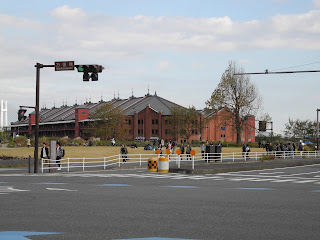 The bayside metropolis of Yokohama has been the setting for many a Mood Kayo song, and it's no wonder, considering how many bars and other drinking establishments are located there. At the same time, with its ideal location by the sea, there are also plenty of opportunities for romance.

Perhaps then, it's not that common a thing to come across a Japanese folk song about Yokohama. However, singer-songwriter Hako Yamasaki（山崎ハコ）, who had actually come to live in Japan's 2nd-largest city (by population) when she was a child, created a very moody folk song about her city.

This is a track from her 4th album "Nagare Yoi Uta"（流れ酔い唄...The Drunken Song） which was released in June 1978. Simply titled "Yokohama", the setting is of a young girl in the rain, perhaps having suffered some sort of trauma, just yelling at a stationary barge in the river. It's definitely not the happiest situation but she insists that Yokohama is her home and she's fine to be living there. I wonder if it's autobiographical.

"Yokohama" starts off with a folk rhythm led by a gently propulsive guitar and Yamasaki's heartfelt vocals but then around the halfway point, a brigade of strings pours in like a flood to add some extra drama to the proceedings. Things get calm again and then the finale happens with the strings returning. No bars, no trysts...just a lass trying to regain her bearings in Yokohama.