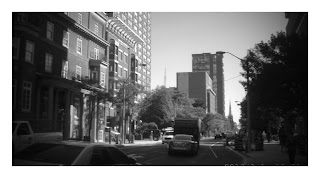 I remember when I first listened to the jazz torch song sensation of Yoko Oda's（小田陽子）"New York 1961 Fuyu"（ニューヨーク 1961 冬）. There was something rather jazzy and romantically Henry Mancini-esque about that one which basically served as the title track from her 1981 debut album "New York 1961" although words and music were provided by folk singer-songwriter Akiyoshi Imanari（いまなりあきよし）.
Well, a couple of years later, Oda released her 2nd album "Shadow & Me" and once again, I've gotten attracted to the title track (first track). To add onto the similarities, Imanari created the song for the Osaka native and as well, there is also something fairly Mancini in "Shadow & Me", but this time, the arrangement takes the melody into not only a straight pop vein but also into something Latin (bossa nova, perhaps?). In fact, I felt that there was a slight kinship between this song and Keiko Maruyama's（丸山圭子）"Douzo Kono Mama" (どうぞこのまま）which I've also compared to some of the movie music that Mancini provided in the 1960s.
I'd initially thought about putting this into the City Pop category but after listening to it a second time, I think the pop category is probably more appropriate. Listening to a few more of the tracks, I think that they rather skirt the borderline between pop and City Pop, so perhaps overall, I can probably place the album "Shadow & Me" as a solid adult contemporary release.
Posted by J-Canuck at 8:03 PM