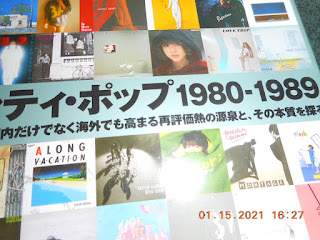 Perhaps one of the things that I will talk about with Saira and Derrick on Saturday night will be how the 1970s Shin-Gosanke（新御三家）heartthrobs of Hiromi Go（郷ひろみ）, Hideki Saijo（西城秀樹） and Goro Noguchi（野口五郎）were more than happy to jump into the City Pop pool as of the latter part of that decade and well into the 1980s.

Case in point is this light and mellow number from Noguchi's February 1980 album "Jukai ~ Ballade"（樹海 Ballade...Sea of Trees） titled "Sekai ga Tomaru" (The World Stops). This bossa-flavoured dinnertime cocktail-friendly ballad doesn't hint at any sci-fi disaster but simply a very much in love couple enjoying time together so that what happens on the Earth doesn't really matter. If this were played at any City Pop party, it would be a slow dance to be certain. And you gotta have the sax in there, too!

Composed by Hiroshi Sato（佐藤寛）, but not the musician/composer behind the 1982 "Awakening" album but actually Noguchi's older brother, and written by the late Rei Nakanishi（なかにし礼）, Noguchi croons through "Sekai ga Tomaru" with aplomb and even makes a shoutout to an American AOR singer, Michael Franks. Come to think of it, I ought to dedicate my part on "Tokyo House Party" to Nakanishi and prolific kayo composer Kyohei Tsutsumi（筒美京平）who both passed away late last year.