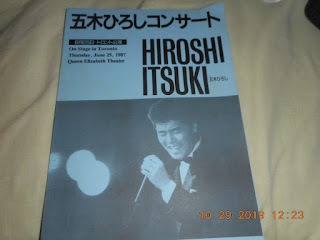 On a recent "Uta Kon"（うたコン）, both enka singer Hiroshi Itsuki（五木ひろし）and veteran singer-songwriter Kei Ogura（小椋佳）appeared with the latter announcing his retirement from singing as of the end of this year. It would mark 50 years since Ogura's beginnings in the music industry and so he leaves behind a legacy of oft-tenderhearted music.

One such song with Ogura's lyrics and Takao Horiuchi's（堀内孝雄）music is "Sanga" (The Mountains and Rivers) which was released as Itsuki's 109th single in April 2000. An enka song in the epic tradition of describing the might and grandeur of nature and how all of us are all bound together, I'd been thinking about all of the emotions that are brought to bear in this genre, and sure enough, "Sanga" is one prime example.

Ogura doesn't appear nearly as often to perform but when he does, he can potentially outdo the singers that he writes songs for, and I think he does this with his own cover of "Sanga". There is a warmth and vulnerability whenever he sings, and for many of his admirers, it'll be a sad if grateful day when he does retire at the end of the year.

Horiuchi also performed "Sanga" with his own vocal flourishes, as the song peaked at No. 43 on Oricon. And the song has been featured at least twice on the Kohaku Utagassen, once in 2000 and then just last year.