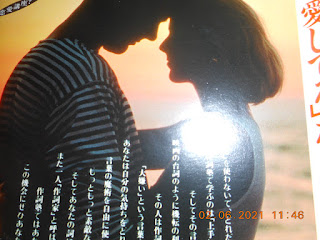 No, I'm painfully aware that I'm not young anymore but I'm not quite THAT old yet. Admittedly, though, this is going to be one of the more unusual ROY articles for this Thursday since the origins of this song go far back to the year 1932. So, if you can bear with me for a few paragraphs, I can let you know where the youth (well, toddlerhood) part of this comes in.

According to Wikipedia, the popular song "Lover" by the legendary songwriting team of Lorenz Hart and Richard Rodgers was created in 1932 and first used in the musical flick "Love Me Tonight" starring Maurice Chevalier and Jeanette MacDonald. Ironically, I'd thought that the song, from its title, was this sweeping romantic waltz for the lovers in all of us but when McDonald sung it, her character was trying to control an uncontrollable horse, so it was more of a comical thing.

It's been covered numerous times over the century in its sung version and as an instrumental piece. The cover above is by Paul Whiteman and his Orchestra with Jack Fulton as the vocalist as recorded in 1933.

Maybe the one cover that is most generally known is the one by the famous Boston Pops Orchestra led by Arthur Fiedler and then John Williams (yes, that John Williams). I've known about the Boston Pops since I was literally a baby because they were often on that compilation of five LPs by RCA Victor when we got our huge oaken stereo. It was labeled "50 Years Of Hits In Stereo" and was the source for all of my nostalgic love for the standards through the Pops, Bing & Rosemary, Henry Mancini, etc.

I don't know when exactly Fiedler and the Pops first recorded their version of "Lover" but interestingly enough, their majestic version wasn't included on "50 Years Of Hits In Stereo". By this time, I've heard this "Lover" frequently, and it certainly feels like it was meant for dozens of couples traipsing joyfully all over the ballroom floor. The strings and the French horns are absolutely exquisite, and really, I can't imagine any horses trying to be calmed down with this take.

Ahhh...this is where the ROY comes in although I was indeed far younger. Speaking of "50 Years Of Hits In Stereo", there was a version of "Lover" among the discs but this was the one done by bandleader and pianist Marty Gold and his Orchestra. Originally his cover showed up on his August 1960 album "Skin Tight", and this was my first exposure to the Rodgers and Hart classic.

Man, this was one swinging blast! Gold arranged things so that he threw trumpets, trombones, saxophones, percussion and even a crazed timpani into this massive jazz party march. If it had been used in a movie, his "Lover" wouldn't have been calming down a horse or inviting dancers for a waltz; instead it would have been instigating one of the classiest chase scenes involving the Rat Pack...while they were sipping martinis...very dry ones.

It's hard for me to choose which one I prefer, the Fiedler waltz or the Gold swinger.

Anyways, seeing that "Lover" was born in 1932, let's see if we can merely bring back the three songs that have already been written on "Kayo Kyoku Plus" from that year.